Postpartum Anxiety & The Incessant Fear of Losing Your Loved Ones

Alexis Lesa describes her constant fears of losing her husband or children while she had postpartum anxiety. 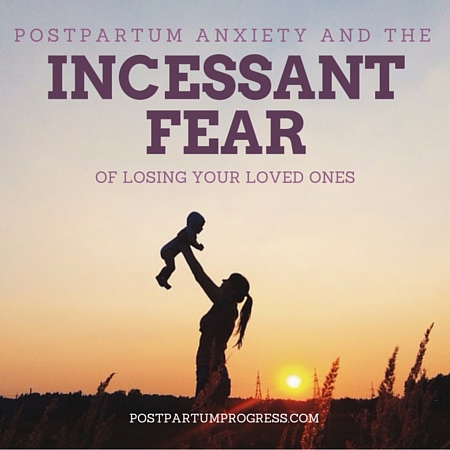 I never used to think about death. As a teenager, I thought I was untouchable, invincible, like many teenagers are apt to do. I didn’t understand what it might mean to lose someone; I didn’t experience a death in my family until I was 24 years old.

When I got married, though, overnight I became aware of the possibility of having something invaluable taken away from me. However, it wasn’t until I developed postpartum anxiety that I became preoccupied with the topic. It began to fill my brain, taking on a life of its own and sometimes making it difficult to focus on anything else.

An obsession with death and dying can be a symptom of postpartum anxiety, especially in those women with postpartum OCD. Of course, at the time I didn’t know this, so I just thought I was losing my mind.

I had to check on my son at least twice before I went to sleep every night, and I often found myself getting out of bed to make sure the front door was locked, even though I always lock the door behind me when I get home. Every time we’d drive on the freeway, I would lock the car doors because I had a recurring waking nightmare about a door malfunctioning and me or one of my family members being sucked out of the car, kind of like in the movies when an airplane door is opened mid-flight.

I’d often think about my own death, too. Not in a suicidal way, just in a compulsive, hysterical way. What would my family do without me? What would happen to me? Would anyone go to my funeral? Who would dress my body? I didn’t want anyone to see me without clothes on. It’s almost funny in retrospect, but it was terrifying at the time. My stomach would be in knots for hours after one of my rounds of death thoughts.

Even now, though a great deal of my postpartum anxiety symptoms have abated, the fear of death and dying remains. This morning I cried for an hour after reading the blog of a woman whose son killed himself six months ago. I couldn’t stop myself from reading every entry from the last six months. She has two sons, and the oldest is gone now.

I kept thinking of my own two boys and I swear, my heart stopped beating when I thought of one of them not being here anymore. I got up and went to my oldest son’s room; he was supposed to be napping, but was doing his usual routine of talking to himself to stay awake. I laid down next to him and asked him to hold me, and I told him that I loved him. He put his little arms around my neck and squeezed me so tight. I finally was able to stop crying, but I couldn’t stop the thoughts.

I’m not sure when this will go away. Perhaps it’s just a part of my personality now, like my love of reading or loud laugh. I don’t want to let it rule me, though. Sometimes I’m so paralyzed by worrying over my mortality that I don’t have time or energy to appreciate the time I have here on this earth.

I suppose I need to take what’s good about this part of postpartum anxiety and run with it, since I don’t know if it’s necessarily temporary. For example, I can’t hang up the phone with my husband or go to bed for the night without saying “I love you.” I have to say it to my kids every time we part, too. My husband asked me why I feel the compulsion to say that (even when I’m angry or annoyed with him), and I told him that if he or one of our children were to die suddenly, I would want the last words they heard to be “I love you.”

So maybe I’m crazy, but at least my family will never question my love for them. In the grand scheme of things, perhaps it’s worth the trade.